"The neighborhoods where we live become the starting point to invent a make-believe vision of everyday locations, the overlooked and ordinary places we inhabit...

The architecture, primarily of the early 20th century, provides open ended territory; moments when I can be specific and yet have the freedom to transcend a particular place and time. My aim is not to replicate the exact location, but to communicate the feeling of visual excitement when I first 'see' something intriguing." 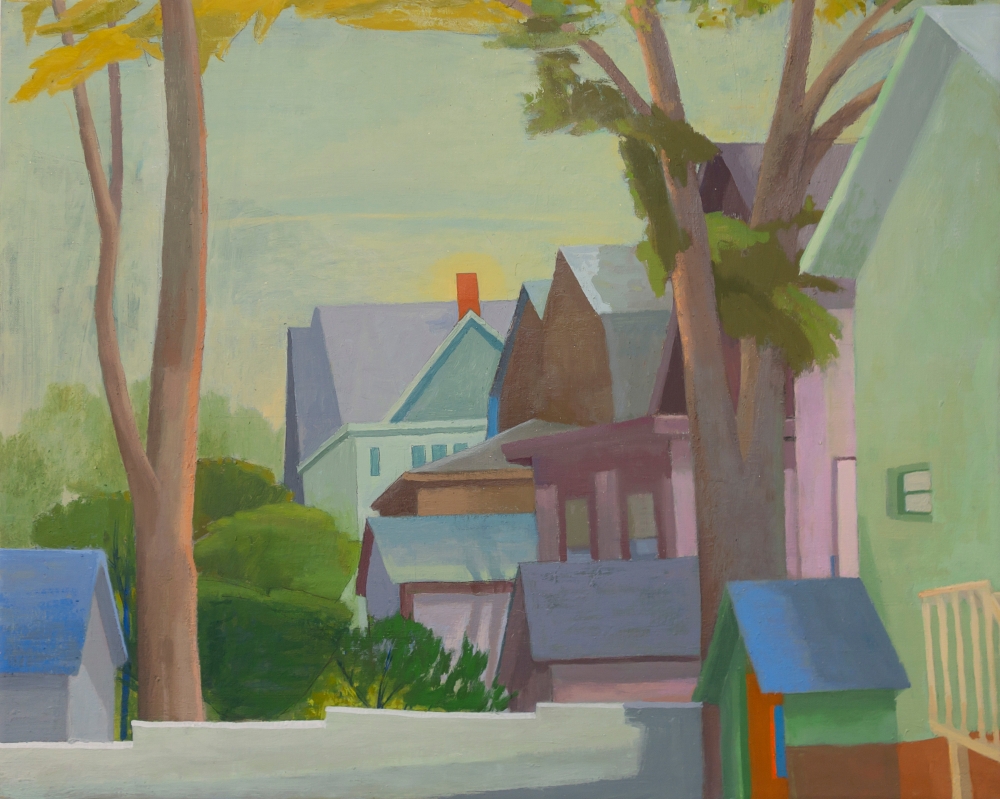 The neighborhoods where we live become the starting point to invent a make believe vision of everyday locations, the overlooked and ordinary places we inhabit.  It is a subject that reflects my personal life. I grew up in the suburbs of Cleveland Heights, Ohio and live in the older suburbs of Philadelphia. The architecture, primarily of the early 20th century, provides open ended territory; moments when I can be specific and yet have the freedom to transcend a particular place and time.  My aim is not to replicate the exact location, but to communicate the feeling of visual excitement when I first "see" something intriguing.

My paintings are complex, dense and filled with many points of view and spatial juxtapositions. In my work there is tension between opposites, the geometry of a house against the grace of a tree.  This motif provides a challenge as I manipulate and orchestrate different components to resolve and unify a painting.  I want to create a visual drama that surprises and forces the viewer to reconsider their experiences and expectations.

I construct my paintings from drawings made from direct observation while in my car.  The large scale paintings modify and shift but still honor the initial site that inspired me.  My concern with balance, proportion and an order imposed upon the subject, pays homage to early American modernists who abstracted the landscape.  My paintings unfold slowly so the viewer encounters all the relationships in multiple ways, providing endless readings.  Through the color, light and space shifts, I am able to compose my own idiosyncratic world.

I learned to look in a different way than most people.  I grew up the daughter of deaf and hard of hearing parents in a household where communication was mostly visual and not verbal.  My father would point things out that he wanted my siblings and I to see.  I learned to notice, see, look carefully and pay close attention to the outside world. 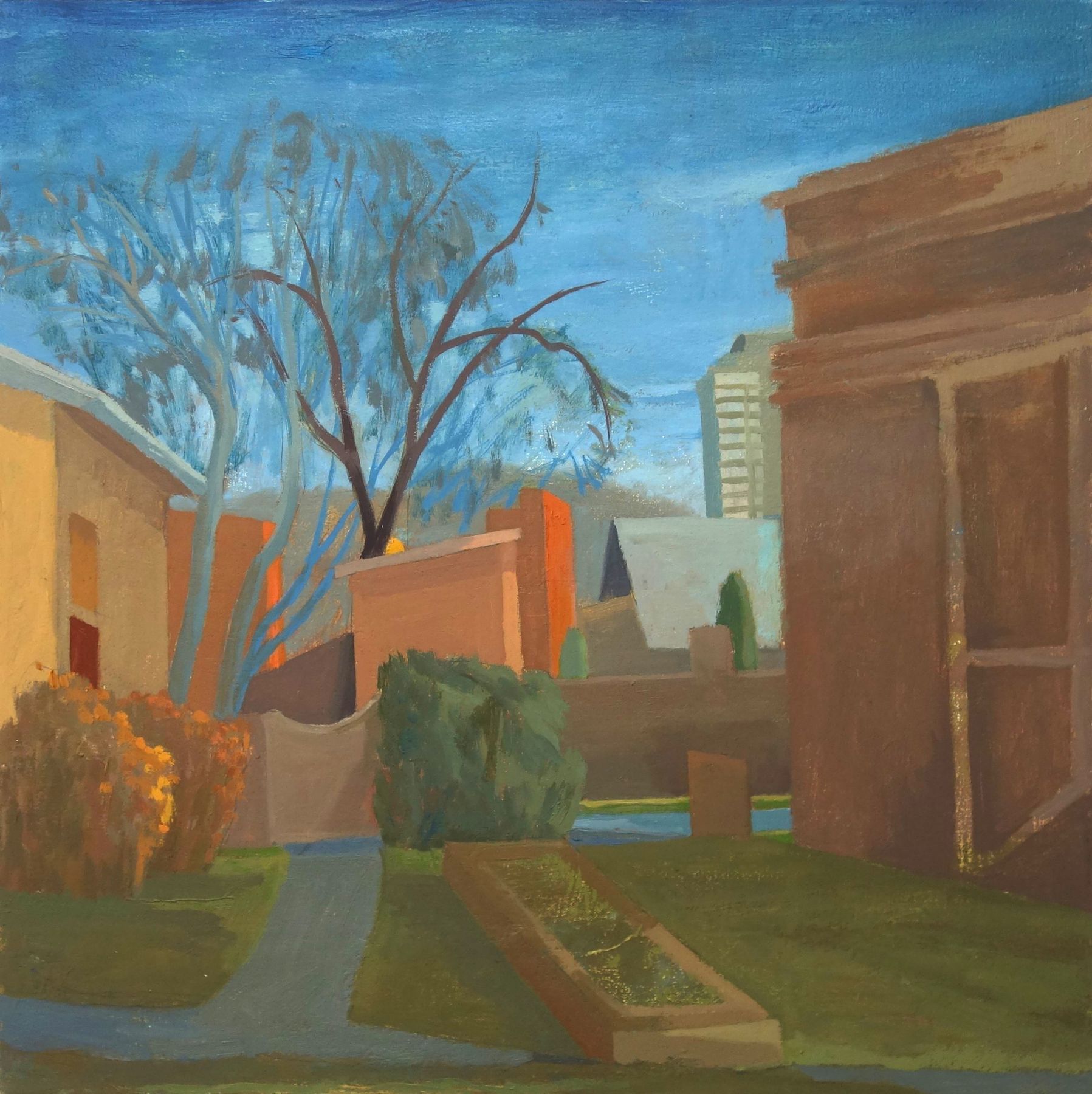 Developed from observational drawing and small preparatory works, Celia Reisman's paintings are an exploration of color and geometry that depict scenes from suburban neighborhoods. The emphasis on geometric shapes in her work harkens back to early American Modernism, where artists such as Marsden Hartley and Milton Avery simplified, balanced and ordered the landscape. Firmly planted within the border between representation and abstraction, the recognizable houses and landscape features maintain a clear sense of place, while simultaneously existing as artistic constructs of basic shapes and forms. The intriguing result is the familiar but mysterious juxtaposition of the boxes, triangles and organic shapes of suburbia.

Reisman often investigates the visual complexity that happens at the border between suburban properties; for example, at the perimeter of a yard, where the space is defined by a fence or a back alley. When two or more properties come together, shapes, color, and objects form a visually surprising, incongruent combination of tension and calm, perhaps reflecting the uneasy peace of collective neighborhood living. The title of this exhibition is in part a reference to the book Borderland: Origins of the American Suburb 1820 -1939 by John R. Stilgoe who documented the development of the suburbs of cities like Chicago, Boston, and New York from the mid-19th century to the onset of World War II. 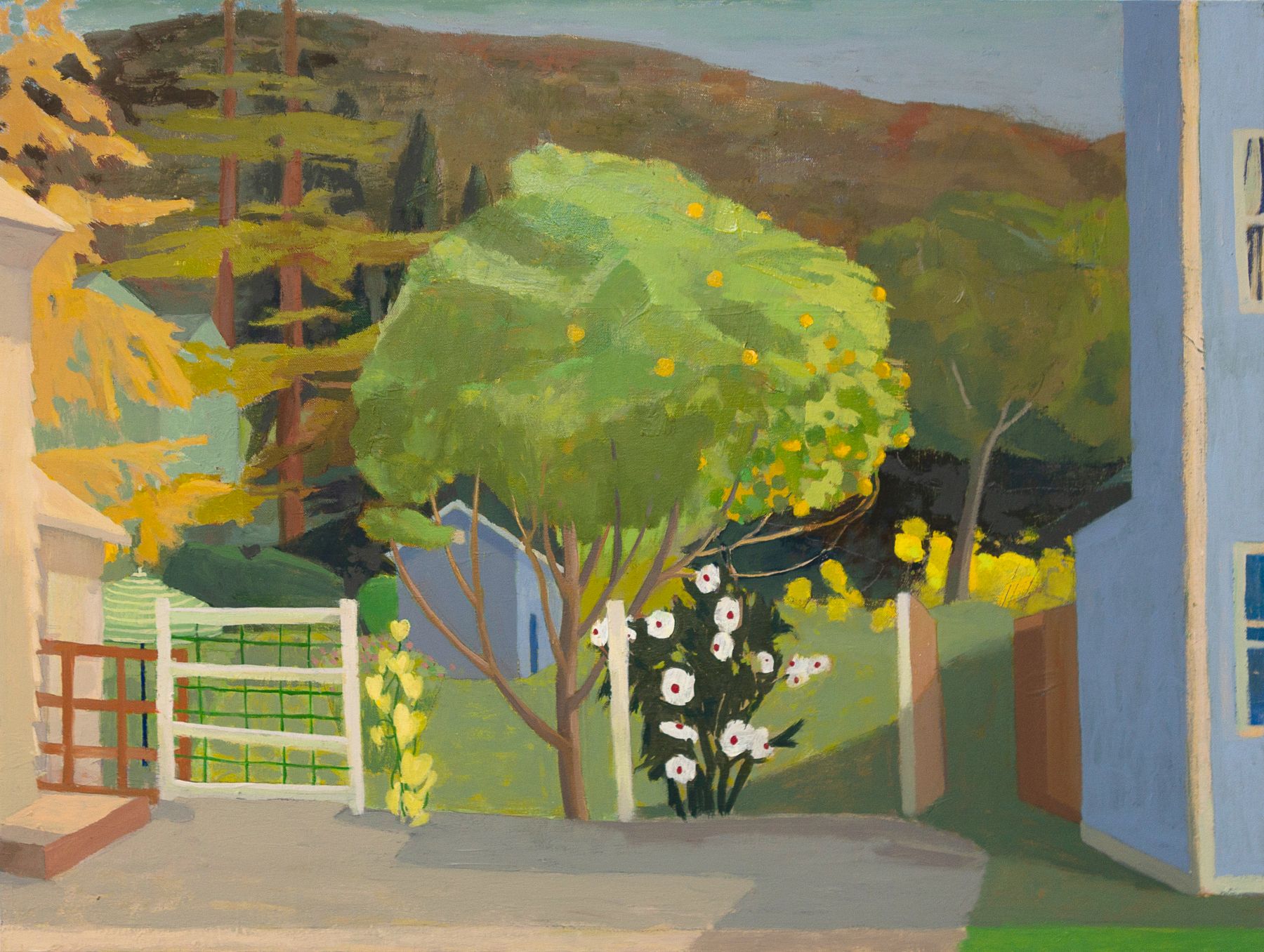 Reisman grew up in Cleveland Heights, Ohio and lives and works in Philadelphia. She received her BFA from Carnegie Mellon University and her MFA from Yale University. She has been represented by Gross McCleaf Gallery in Philadelphia for more than thirty years. The artist has had solo exhibits in New York City, San Francisco, and Rochester, VT, as well as being featured in a fifteen-year survey exhibit at the James A. Michener Museum in Doylestown, PA. She received a Purchase Award from the American Academy of Arts and Letters Invitational Exhibition in New York City. Reisman has taught at numerous prestigious art institutions throughout the Mid-Atlantic Region. 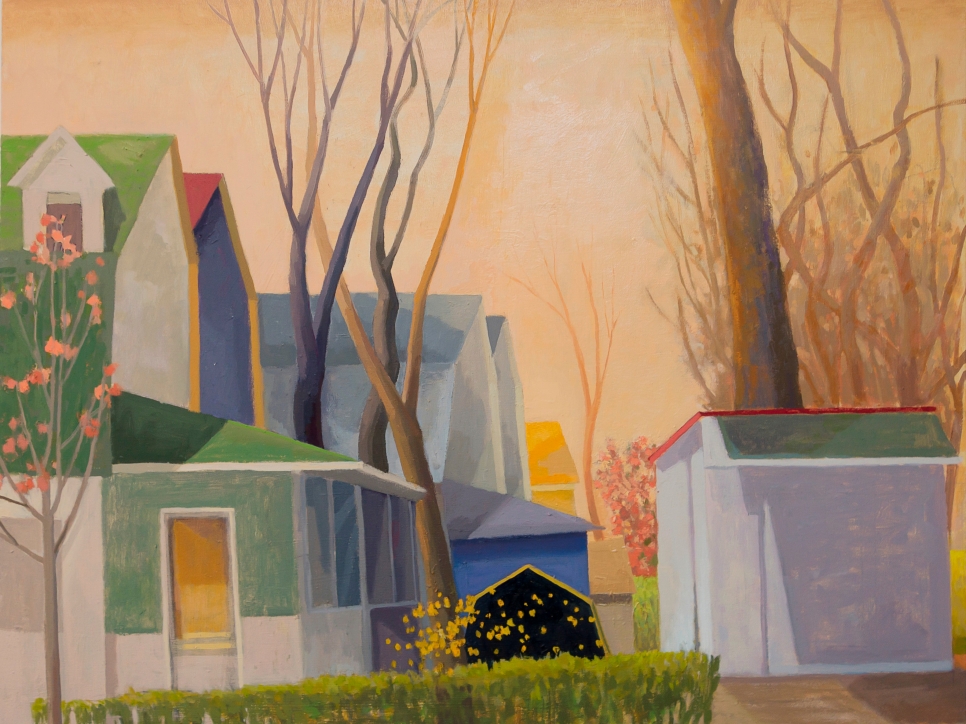 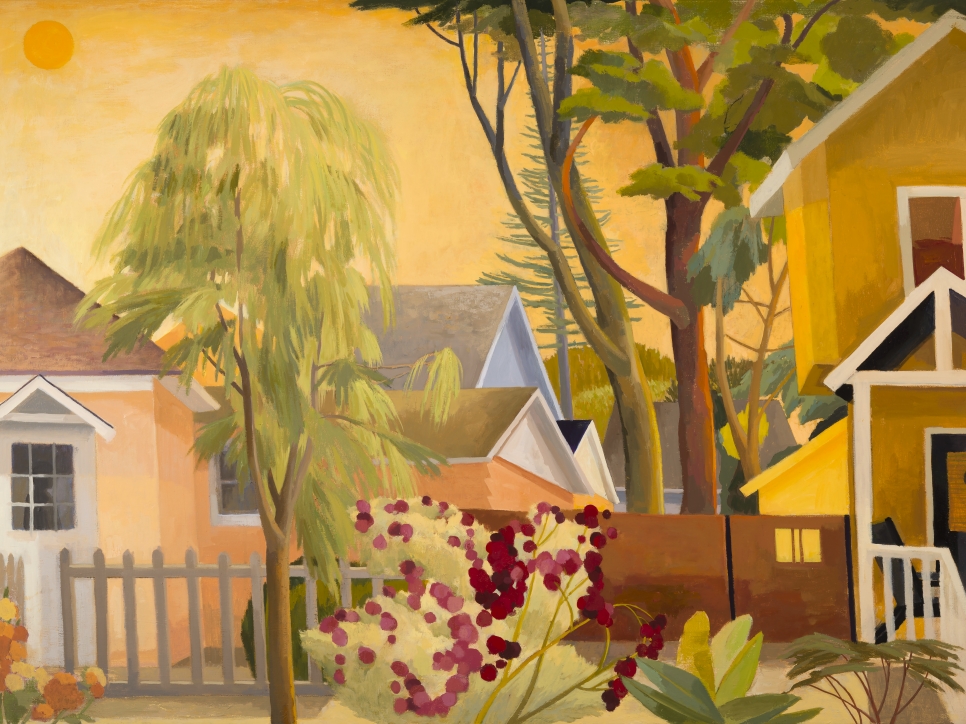 Celia Reisman
A Moment Noticed May 2017 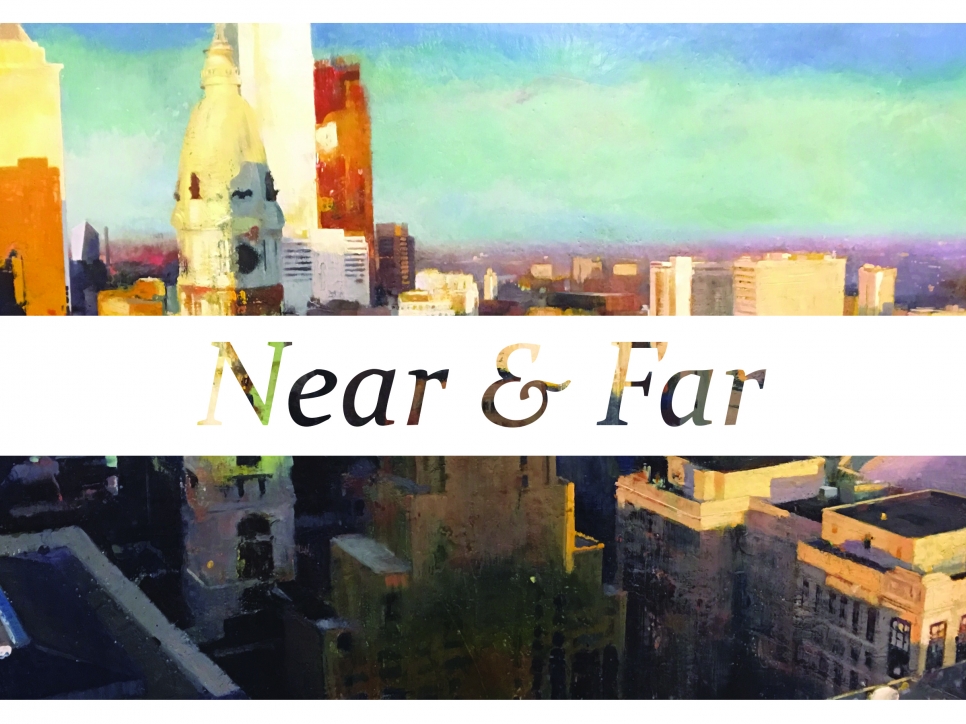 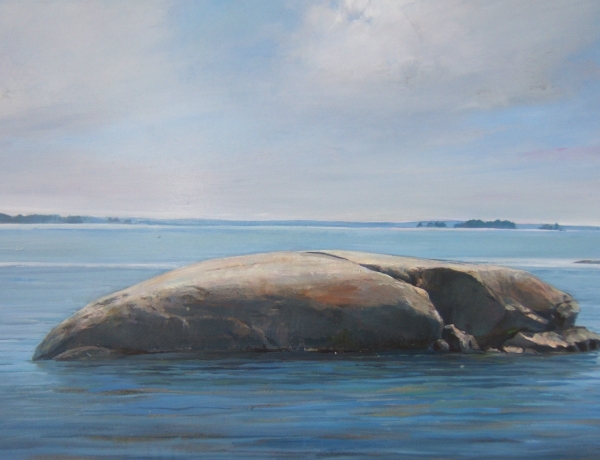 Douglas Martenson paints observationally in various locations in Maine and Pennsylvania. He meticulously documents the light, atmosphere and environment of each view through a variety of painting techniques. While the painted objects appear with local color firmly established, a sensitive eye will begin to perceive deep reds, light purples, golds, chromatic grays and a spectrum of ever-present blues. Martenson’s careful handling of paint opens up worlds within each object, giving way to a conceptual interpretation over time.